An undergraduate student at the University of North Carolina at Chapel has attracted recent attention from Asian media for his work on climate change adaptation measures by a remote island nation.

In 2014, Ellsmoor wrote a term paper on climate change adaptation in the Republic of Kiribati, whose president, Anote Tong, authorized the purchase of a plot of land in Fiji to relocate his nation in the face of climate changes.  In the summer of 2015, he spent two months carrying out research in the Pacific for his senior thesis. Ellsmoor was interviewed by Radio New Zealand and 95bFM, and co-wrote an article for Development Policy Blog. He spoke with the Coastal Resilience Center about his work.

Tell us about your work with Dr. Smith, and work you have done on coastal resilience and hazard mitigation during your time at UNC. How has your work with him influenced your career?

I was the only undergraduate enrolled in Dr. Smith’s Hazards and Costal Resilience class, and was able to learn a great deal about disaster and climate change adaptation planning. It was for this class I first started my research on Kiribati for a term paper, and discovered the discrepancies on this adaptation policy between what was being reported by the international media and what was said by those who visit the land purchased in Fiji.

How did you get from UNC to the South Pacific?

I’m originally from the UK, and studying at UNC on the Morehead-Cain Scholarship. I was lucky enough to be able to study on exchange at the University of Auckland in New Zealand for a semester, where I took classes in Pacific Culture and Pacific Geography. I received funding from the Morehead-Cain for a summer research project, where I travelled to Niue, Samoa, Tuvalu and Fiji to research climate change adaptation and mitigation.

Why was Kiribati the subject you chose for your term paper? How has the reaction been to the land purchase topic?

Kiribati is one of the most vulnerable countries in the world to climate change. 100,000 [people] lives entirely on atolls, lying barely meters above sea level. President Anote Tong has been a key figure in climate change negotiations internationally, and made headlines worldwide when he announced the purchase of land in Fiji that could be used to relocate the population of Kiribati in the event of inundation. I found this fascinating, as it is not often that we hear about Kiribati in the mainstream media. Surprisingly, very few outsiders had visited the land since the purchase and we were the first to stay there in the village overnight. 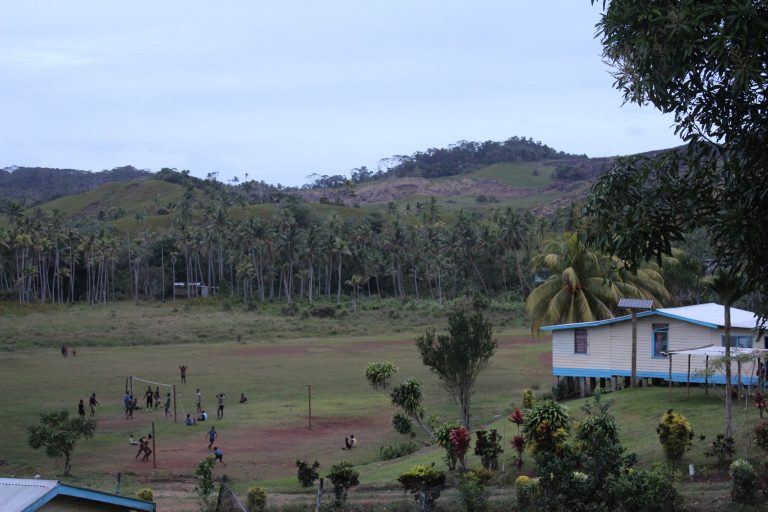 How would you describe the degree of planning for climate change in these Pacific islands compared to what you have studied in the United States? What are similarities and differences?

Pacific Islanders are acutely aware of the potential effects of climate change. There are many organizations working with local and regional government to initiate climate change adaptation strategies. Remoteness and small population size are a huge challenge, and many island nations suffer from a lack of governmental capacity as their small administrations carry out all the duties of large bureaucracies in larger countries. This means that although all nations have some sort of climate change strategy on paper, there are difficulties monitoring its implementation. For atoll nations, there is also the added complication of extreme pessimism for their future existence. This can cause conflict between those that want to lead the adaptation process, and those that see no point in developing one on islands that could soon disappear.

What do you think the future holds for small island nations in regard to climate change?

Islanders themselves are far less negative about their future than the outside world [is]. There are resilient communities determined to fight for the future of their homes and their cultures that exist outside the narrative of doom and gloom we here in the West. I believe islanders will have to work hard to adapt to the challenges bought by climate change, but they have a promising future. Even the most at-risk, the low-lying atolls, can overcome these problems with the continuation of the careful planning that is already taking place.

What are your goals for your career? Do you plan on working on any of the themes being studied by the Coastal Resilience Center?

I am particularly interested in the role of renewable energy in climate change adaptation. I was inspired by the positive impact this can have in island communities and believe that they can set an example to the rest of the world, so would love to continue research in that field.