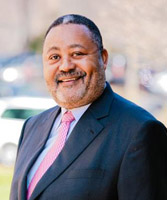 Ellis M. Stanley, Sr., is Managing Partner of Ellis Stanley Partners, LLC and Chairman of the Global Board of the International Association of Emergency Managers. He has more than 40 years of emergency management experience. Formerly Executive Vice President at Hammerman & Gainer International, Inc. (HGI) responsible for disaster and emergency management service as well as Vice President for Emergency Management Services at Dewberry LLC., he has also served as General Manager of the City of Los Angeles Emergency Preparedness Department.

Mr. Stanley graduated from the University of North Carolina at Chapel Hill in 1973 with a Political Science degree. He is also a graduate of the Executive Leadership Program for Senior Homeland Security Officials for the Post Naval Graduate School in Monterey, CA, and graduate of the John F. Kennedy School of Government’s National Preparedness Leadership Initiative. He was awarded an honorary doctoral degree from the University of Maryland-Eastern Shore in 2009, and was elected a Fellow of the National Academy of Public Administration in 2007 and inducted into Contingency Planning and Management Hall of Fame’s Public Servant in 2005.

He is a member of National Academy of Sciences Resilient America Roundtable’ Vice Chair of the Bill Anderson Fund Board of Directors.