Floods are the most common, most frequent and most costly type of disaster in the United States. A flood-resilient nation uses state-of-the-art analytics and data tools to help reduce or eliminate fatalities, minimize disruptions and reduce economic losses, according to a new report co-authored by the Coastal Resilience Center of Excellence (CRC). 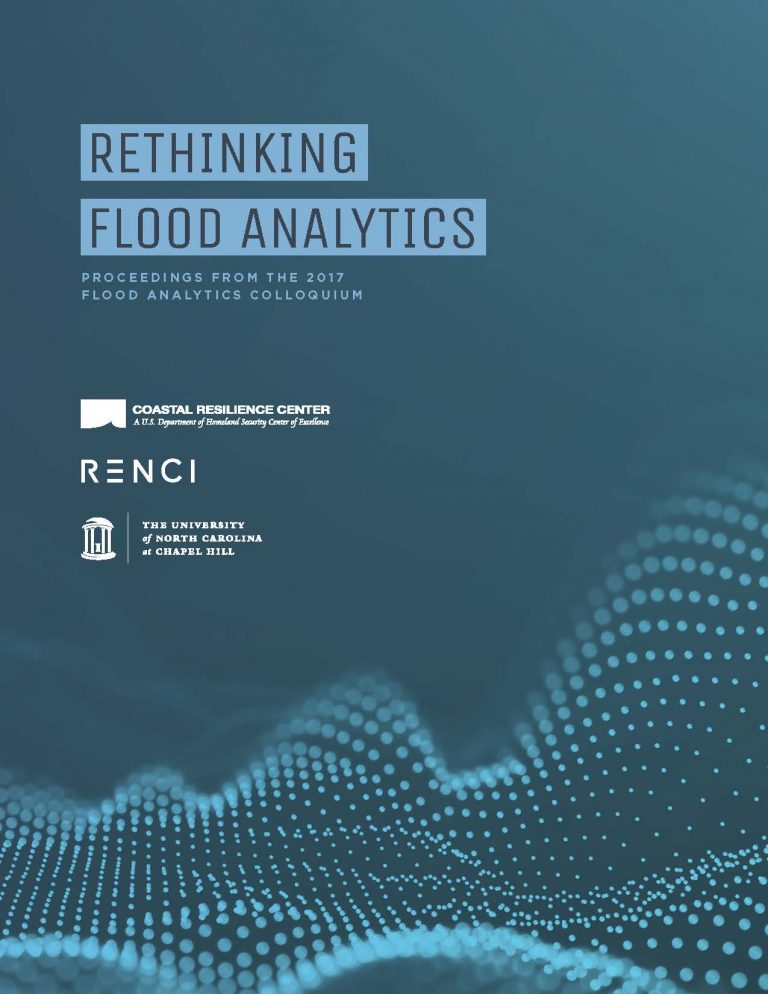 Experts from across several various sectors and disciplines – some in the flood prevention and emergency response fields, others from as far afield as demography, satellite technology and news media – gathered to discuss what the future could hold at the Colloquium, held Nov. 7-9, 2017, at the offices of the CRC and RENCI in Chapel Hill, N.C.

Attendees discussed solutions and approaches to flood prediction and impact analytics that ranged from enhancements to current systems to entirely new types of technology. The event centered around ways to improve work done as part of the DHS S&T’s Flood Apex Program. A multi-disciplinary group of technical specialists and end users discussed flood analytics through presentations, group discussions and “open mic” sessions, while addressing challenges and gaps in the field.

The full report can be read on the CRC website.

“The method for quantifying flood risk is changing and the potential for doing a much better job of addressing that risk through analytics has increased dramatically,” according to the report. “Some techniques, such as numerical modeling, have been part of flood risk analysis for years. While important, evolutionary changes in the existing tools typically result in only incremental improvement.

“The most dramatic advances tend to come from techniques not previously considered in connection with flood risk analysis,” including big data, artificial intelligence, remote sensing, social media and the internet of things.

Among the conclusions for developing a more flood-resilient nation are:

DHS S&T created the Flood Apex Program in 2014 to bring new and emerging technologies together to increase communities’ resilience to flood events and to provide predictive analytic tools for floods. The goals of the Program, which is managed by the First Responders Group of DHS S&T, are to reduce fatalities and property losses from future flood events, increase community resilience to flooding and develop better investment strategies to prepare for, respond to, recover from and mitigate flood hazards.