This fall, the Department of Homeland Security’s Coastal Resilience Center (CRC) will collaborate with the U.S. Coast Guard (USCG) to host the 7th Annual Maritime Risk Symposium. The event, which runs from Nov. 14-15, 2016, at the University of North Carolina at Chapel Hill, will focus on “Integrating Maritime and Coastal Resilience.” The conference is designed to bring together leading researchers and practitioners in the maritime and homeland security sectors to identify pressing needs in their fields and inspire researchers to think beyond their current focus.

Dr. Joseph DiRenzo, Director of Research Partnerships at the Coast Guard Research and Development Center in New London, Conn., is the Coastal Resilience Center’s Special Advisory Board Liaison to the Coast Guard. He is co-chair of the 2016 conference planning committee, along with CRC Principal Investigator Dr. Rick Luettich. In advance of the opening of registration for the conference, DiRenzo spoke about USCG’s role in maritime security and the relationship between security and resilience. 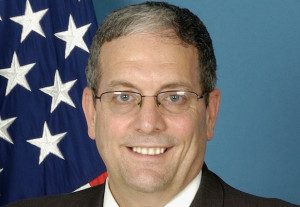 CRC: What originally drew you to the USCG?

JD: I was a naval officer assigned to the Naval Counter-Drug Office in the Chief of Naval Operations office at the Pentagon, and I spent a tremendous amount of time over at Coast Guard headquarters. Even though I am a Naval Academy graduate, and I was very proud to be a naval officer, the mission, ethos and esprit de corps of the Coast Guard drove me toward the organization; it’s the best decision I could have made.

CRC: How did you become more involved or interested in the role of the USCG in natural disaster response?

JD: My involvement began with the Coast Guard’s response to Hurricane Katrina. I was on watch in our Incident Management Team in Portsmouth, Va., when Katrina came ashore. … The sheer complexity of the storm and our response to it was pretty amazing. [There were] 34,000 people rescued in just five days. I think it was, frankly, one of the Coast Guard’s “finest hours.”

CRC: How is coastal resilience related to maritime security?

JD: If you don’t have a resilient nation, it absolutely impacts your ability to conduct commerce. If the maritime transportation system is disrupted in any way, the impact economically, politically, and potentially militarily is pretty darn significant. We are a maritime nation.

CRC: Could you speak to the CRC’s role in meeting the mission of the USCG?

JD: During Hurricane Irene [in 2011], the ADCIRC [storm surge] model that [CRC enhanced]… was one of the primary tools used by Vice Admiral Rob Parker, Vice Admiral Dean Lee and three other Flag Officers and their Chiefs of Staff to [make the decision to relocate] the Atlantic Area Command and Fifth District Command away from Portsmouth, Va. to St. Louis, MO. To this day, I will never forget that five flag officers were positioned around a 22-inch monitor, and [CRC Principal investigator] Rick Luettich was walking them through what ADCIRC was showing them for Pamlico Sound and up into the Chesapeake Bay – that whole area around Portsmouth and Norfolk. It was a graduate-level discussion, and engagement between Rick and the Flags was something to behold.

The model was incredibly accurate, and a day after Isabel our beautiful parking lot at Atlantic Command looked like an Olympic swimming pool. Everything that model had predicted came true, and it was the absolute right decision to move the Command Center – we were able to maintain continuity of operations from St. Louis.

CRC: Tell us about your experiences with preparedness measures in the Caribbean versus the Northeast, where you currently live.

JD: I am proud to say I have been through four Cat 4 and Cat 5 hurricanes – including hurricanes Luis and Marilyn, which just flattened the portions of the Caribbean such as St Thomas. You really haven’t lived until you’ve been in a building, and the building starts to sway, and you can hear the building itself moving. In the case of Marilyn, in 1995, it actually took a bit of a button hook after it went past St. Thomas, and I was in San Juan in our command center. You actually felt the building moving. Resilience, and the analysis of resilience and preparedness, can be very personal.

In the Caribbean, they take the fact that when hurricane season starts, there will be a hurricane. In New England, I think that Hurricane Sandy galvanized a key point that you could be hit by a superstorm or a hurricane and it can be pretty darn serious. I think, going into this last hurricane season, New England in particular was as prepared as the Southeast and the Caribbean were. Changes in climatology, the fact that we might have more intense storms, that kind of mindset is this will be more of the norm than the exception.

CRC: Talk about the Maritime Risk Symposium – how it started, how it has evolved over time.

JD: [In a laboratory setting, researchers] don’t bring as much of the real world into the research as they could. So seven years ago I said to Dr Isaac [Maya, the Research Director at the CREATE Center of Excellence at the University of Southern California], “Maritime risk and the quantification of risk, whether it’s cyber or natural hazards or WMDs or terrorism, nobody’s really gotten operators and academics in the same room for a couple of days to kick the ideas around.” And he looked at me, and he said, “Well, we should do that.”

So in 2010, we had the first Maritime Risk Symposium at USC. We initially thought we were going to have 50 folks; we ended up having 87.

Since then, we’ve covered a range of areas; the 2014 event, for example, looked at natural chokepoints and the risks that are involved in what the impact is on the maritime transportation system. How do you maintain maritime domain awareness, what kind of defense capabilities do you need? This last year we focused on the Western Hemisphere, with the Department of Homeland Security issuing the Southern Border Approaches Campaign

This year, the 2016 event is here at UNC-Chapel Hill, and resilience in the Maritime Transportation Sector and the coast is going to be the focus. That is a radically different area than we’ve covered in the previous six [years], so I am super excited about it. We will have world-class researchers in the same room with federal, state, local and industry representatives. This year we have Dr. Stephen Flynn as a keynote speaker.

You really haven’t lived until you’ve been in a building, and the building starts to sway, and you can hear the building itself moving.

The Maritime Risk Symposium also provides a wonderful opportunity for researchers and students alike. I teach for both American Military University and Northcentral University and I constantly using the material presented at these events in my courses.

CRC: What are your hopes for the future of the CRC?

JD: The Coast Guard is the nation’s pre-eminent lifesaver, and those that are entrusted with the safety and security of the maritime transportation system have to have as good an understanding of those systems and the resilience that’s involved to be able to do our job for years to come. I think the relationship that has been built by Gavin [Smith], by Rick [Luettich] with the Coast Guard, and their partners, is something that has really set up an incredible foundation for the future.